I was raised in West Virginia. And no matter where it is I roam on this green earth, I have found that it is my West Virginia-ness that seems to have stuck with me. That became especially apparent when I started writing fiction. Every time my fingers touched the keys, I found the author voice that came out was truly tied to my mountain home. So why fight it? I set the Mountain Magic Christmas Series in Lewisburg, WV.

And what a ride it’s been. With a background in PR/marketing and a strong desire to show off the best the state has to offer, I was keen to mix real locations with fictional ones. And all the places I called, to a one, were so gracious and excited about being featured in these books. So, as you read through Sweet Like Christmas, the final book in the series, I thought you might enjoy a little background about the various places,  people, and in some cases, viral videos that inspired me.

When I realized I needed to set the pivotal first scene in a downtown bakery/coffee shop, it was a bit of kismet that such a place actually existed. Lucky for me, it’s owner, Suzie Hoffman, is a big romance fan and was totally down to be featured in the book. She makes a cameo in Chapter One. We’ve talked at length. And I can confirm absolutely, that a) the bakery really doesn’t serve Christmas cookies out of its case at any time of year (b) they do make delicious cinnamon rolls and (c) they’d totally cater a breakfast wedding  (spoiler alert) if asked. Seriously. Someone should do it, and send me a photo. It’s a great idea. Thanks for being such a great sport, Suzie! 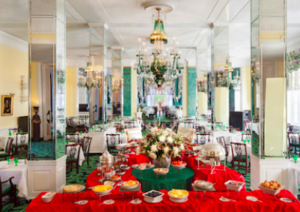 The Greenbrier has been consistently lovely to me throughout the development of this series. They’ve provided me with photos, permissions, and access to their comprehensive wedding planning staff. My characters Kathryn and Hunter in Wrecking Christmas (Book One) (spoiler alert) have their wedding reception there. For grins, their wedding department let me plan out a complete meal plan and agenda as if it were a real thing. If you sign up for my email newsletter, you’ll get the wedding plan as a bonus!

However, for Sweet Like Christmas, I thought it was time I made a big deal out of the Greenbrier’s Main Dining room, which is one of the crown jewels of the resort, if not the entire regional culinary scene. Everything I mentioned in the dinner scene was really on their menu. And it’s all just as delicious as I describe. Seriously, if you want to get a taste of old-world Southern dining, honey, you can’t do better than The Greenbrier.

Now, now, you don’t think the singular character of Uncle J sprang strictly from my imagination, did you? No, I had some real-life inspiration for Uncle J’s sparkling charm in my cousin Darrell, otherwise known in the drag world as Katrina Klein. Ours was a bit of a serendipitous meeting. I had no idea we were related until I did Ancestry DNA and discovered we were second or third cousins by the site’s estimates. We haven’t figured out which sides of our family we’re descended from, exactly. But he felt like family right away. Though most of our correspondence has been by phone or social media, I felt an immediate connection to this funny, quirky, wildly creative man. We’ve stayed in touch over the years, and he was the first person I turned to when I needed beauty advice for this book.

A former drag performer in Key West, Darrell also had a career in product development at Aveda, and it was he who gave me the low down on how a pro mixes up custom scented beauty products. (Frangipani? Who knew? And he can confirm, all the ladies really do go nuts for Campfire.) He was also a personal assistant to Kathy Griffith and some of his jokes made it into this book. Unlike Uncle J, who’s Mexican-American, Darrell is Scots/English descended and grew up in the Shenandoah Valley. But his spirit inhabits Uncle J nonetheless. I couldn’t have conjured that character in my mind without knowing my sweet cousin. Behold the queen, in all his queenliness. He’s actually kinda a big deal in drag circles. His husband’s name is Jim, too. Hi Jim! 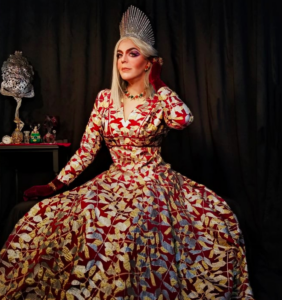 To Mr. Lasagna, Wherever You Are

So, if you’ve read my book Haunted by You, you may have figured out that I have a certain fondness for Italian Americans. I am married to one, after all. And I grew up in a Catholic church that had gotten its start as an Italian-immigrant-only church way back in the day. I have so many great homemade spaghetti dinners y’all don’t even know. So it was with great relish that I created the character of Tino Lasgana, the love interest of the heroine’s mom in Sweet Like Christmas. Honestly, I’m half in love with the guy, and I hope you are, too. He’s really pretty awesome.

Now I can just hear all my Italian-American friends howling that I’m overdoing it on the Italian thing with a cheesy character name like Lasagna. But I assure you, dear readers, it’s an actual name. In fact, I was scrolling through my LinkedIn “People You Should  Know” feature one day when a man by that very last name showed up—an alum from the same college I attended. He was not in the food industry and it wasn’t a stage name. When I got finished snickering, I thought hey. Now that’s a fun character name. And so Tino was born.

As for the Christmas dinner scene, I got a little inspiration from my daily scroll through LADBible, one of my guilty pleasures. This video of an Italian dad in his element, making a huge family feast cracked me up. I mean, seriously. This guy is ALL that.  An Italian man, representin’. Gotta give him the props!

So anyway, there you have it. A rundown of the real inspirations behind my fictional book. I hope you enjoy reading it as much as I enjoyed writing it. It was a magical experience!